The Holocaust, Totalitarianism and The Righteous Right 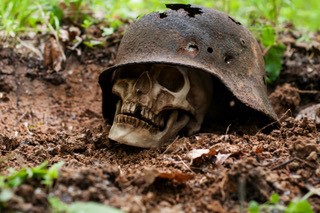 I don’t know if it was because of Holocaust Remembrance Day (January 27) or the continued efforts of the morons on the political and religious right (see:  Kennedy Jr., Robert) drawing parallels between the Holocaust and vaccines. Or it might have been because of the continued fallout generated by my Bulwark Op-ed warning about the parallels between the US today and Germany in the early years of Hitler. Whatever the cause, my phone was ringing and my email was full with requests for comments about today’s environment and the renewed usage of the Holocaust as a rallying cry for different political causes.

The forum that I was the most enthusiastic about was Lunch with Lincoln, a half-hour radio broadcast/podcast sponsored by The Lincoln Project, a group of ex-Republican strategists who have left the party and now are dedicated to two goals:  Stopping Trump and Trumpism; and Preserving Our Democracy. For thirty minutes Lincoln founder Reed Galen and I discussed the current political environment, how close we were to a coup on January 6, and what to be mindful/wary of going forward. At the end of the interview (link above), the Lincoln Project debuted their most recent ad, a controversial video that links Trump and his practices to those of other autocrats, from Mussolini and Hitler to Chavez and Dutarte.  They said they made it 14 months ago—before January 6—but held it back because people said it was too extreme, that something like that could never happen here. Now they’re sorry they didn’t release it before the Capital Insurrection.

It’s been a fascinating experience working with The Lincoln Project. I was introducing them the other night on a Zoom call. The introduction went like this:  “In preparing for tonight’s event, Pam and I did some math. We realized that, as the first generation that could vote at 18, we now had a combined 100 years of voting between the two of us. And in that time the number of times that we voted for a Republican was…less than once. So what the hell are we doing, donating to and sponsoring events for a group of ex-Republican strategists, people who are proud to have helped elect presidents that rank low in our esteem. Well, the answer is:  when you’re drowning and someone throws you a lifeline, you don’t ask their religion or politics. And democracy is drowning today.”

The theme of the Lincoln ad was “It can’t happen here.” Sure, we just dodged a coup. And sure, some folks are starting to ban and burn books. And sure, we had a comic character, a would-be dictator, in the Oval Office for four years. But those were/are aberrations—they’re just the results of a society letting off steam. We’ll right the boat before it takes on too much water.

Back to Germany, the Holocaust and the parallels I drew in the Bulwark article. I know a lot of folks who voted for Trump ‘just to shake things up’, knowing that we have three branches of government (not to mention party leaders) who would keep him in check. All very reminiscent of how the German higher-ups allowed Hitler to gain power, knowing they were smarter and more powerful. Until they weren’t. Back here we saw the same devolution, with a powerful executive branch controlling the congress and packing the court in its favor. Who says history doesn’t repeat itself. That’s the political side of things. But what about us, the people who stood by and let this all happen? Much like Germany in the 30s, we believe we’re too sophisticated and aware to go down the totalitarian rabbit-hole. We know Trump is like the bad boy in high school that we date to shock our friends and piss off our parents, knowing that we’ll eventually dump him and marry Mr. Right. Except Trump doesn’t let you break up with him. Instead, he moves in and brings his friends with him. And even if he moves out, there are a number of faux bad boys ready to take his place, starting with Desantis and Abbott.. As The Who says, “Meet the new boss, same as the old boss.”