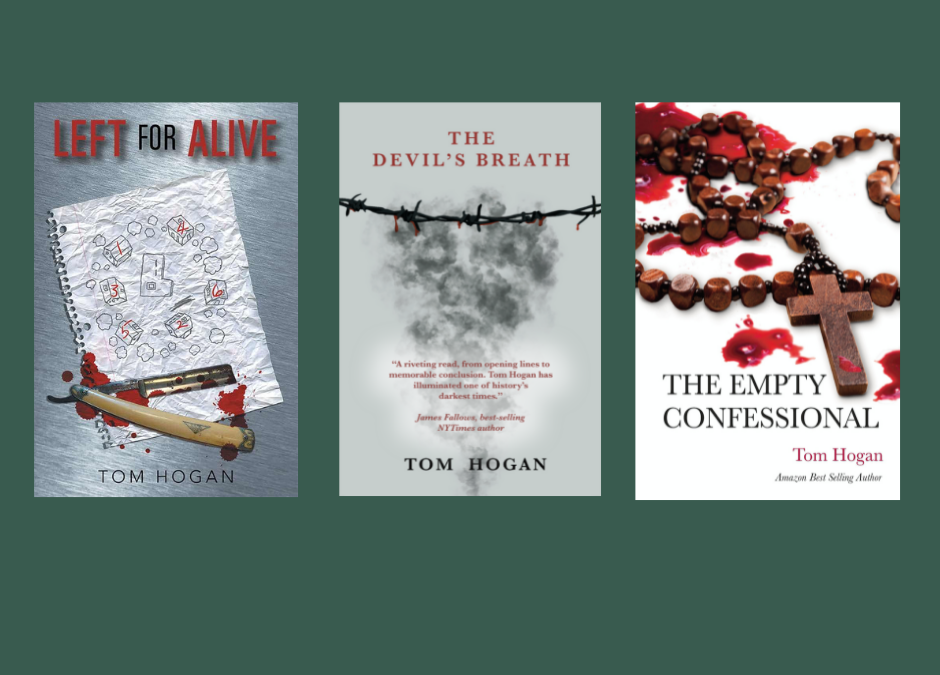 Naming your novel (or script) sounds like it should be easy and fun. It isn’t. It’s the same as naming your company—and I’ve helped over 50 startups do just that. Why is so tough? Simple:  all the good ones are taken. Now, unlike the world of business, when a name is registered you can’t use it, in the world of writing—as in music—you can have multiple books with the same title. If the title’s that good that you can endure the possible market confusion, go ahead. Otherwise, if you’re looking for something unique and compelling, start thinking the moment you start writing.

In naming a company, my partner Carol and I had some basic rules for our tech startups:

You get the idea. I don’t have any hard and fast rules for naming books—all I can do is offer the experiences I had in naming my first three novels.

Left for Alive:  This one had a working title that I loved (since I came up with it): Scars and Bruises. No one else seemed to like it—or I was asking the wrong folks—but as it neared publication date, I started looking for a new title. Because most of the action took place in an abandoned logging camp that the residents named after Moe of the Three Stooges (which is explained in the book), I shifted to Moetown. The confusion with the actual Motown is addressed and an inside joke in the book, but it wouldn’t work as a standalone title.

I finally arrived at Left for Alive because of the theme of sexual violence (against men in prison and women everywhere) that runs through the book. My wife, Pamela Pearson, ran the Bay Area Rape Crisis Center when we first met, so I’ve always known of the damage that rape does, not just physically but psychologically. Long before I met Pam, I remember my mom saying that rape should be a capital crime, since the rapist steals the life of his victim. From those two memories Left for Alive emerged. I like it, but I’m not crazy about it.

The Devil’s Breath:  To be honest, I can’t remember any title for this other than the one we went with. I know there were a couple that I noodled around with—some of my making, some from friends—but nothing caught. I remember how this one came to me, though. My daughter, Maya is a gifted artist who wanted a shot at the cover. I told her I’d like something in black and white (given both the times it took place and the grimness), and the supporting visuals should be barbed wire and something ethereal behind it. For some viewers it might be the cold breath from roll call at Auschwitz. For others it might be the gas itself. I don’t know exactly where the idea of equating Zyklon B gas with the devil came up, but I liked it and it stuck.

A final note:  when I came up with the title, I did a search to see if there were any duplicates. Either my search sucked or I got some bad info, but the title came up clean. After the book was typeset, my associate did another search and we found a few titles by that name. They were more sci-fi or horror, but still, if I’d known about them earlier, I would have probably worked on another title.

The Empty Confessional:  This is the one about to come out, so you need a little background on it. The best way to do this is to give you the positioning and logline that is requested for every script that you submit (to an agent or contest). Here’s the one for this script/book:

Logline:   Pittsburgh 2000:  A young priest finds release from his religious and sexual frustrations through retribution against pedophilic priests and the abusers and rapists he discovers through the confessional.Investigating these assaults is a female detective with her own issues with the law, leading to a complex relationship where priest and detective are sources, foes and, ultimately, partners.

The working title was What the Hell (again, which I loved, since I came up with it). But some early readers and potential reviewers said it was too casual, too whimsical for a topic like pedophilia. So we shifted to The Confessional. But as we got closer to publication date and did a search, we found too many books out there with the same or similar titles. I was reading a crime novel one night and a cop talked about catching someone ‘in flagrante delicto’. I liked the last word, so went with Delicto as the title. In the phrase, while it means ‘caught in the act’ (usually sexual), standing alone it was Latin for ‘guilt’, a major theme of the book. So I had my title—until everyone else barfed on it. It violated the rules for naming a company—too clever and needed too much explanation.

So back to The Confessional, but looking for a way to distinguish it. I won’t go into why ‘empty’ works so well (it would spoil a major theme/idea) but once we inserted it and then did a search (surprised to see it come up clean), we had our title.

If I had to stack-rank the titles, here they are:

Left for Alive (should have stuck with Scars and Bruises)

Final advice: don’t do this on your own. Get input from whatever source or sources you have. Listen to their feedback, but don’t be ruled by it. It’s your book—you’re the one who’ll be living with it, so once you’ve gathered all the suggestions and opinions, go with your gut.