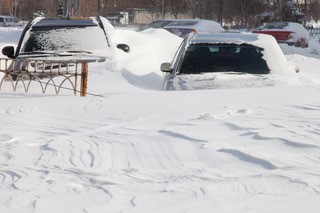 We just arrived at our cabin in Durango, CO and I did something I haven’t done in decades: shoveled snow. It wasn’t for recreation but survival: I needed to clear a path from our car to our front door, with fifty yards of 2-3 foot drifts blocking my way. It was that or sleep in the car. Halfway through the shoveling I wondered how much gas we’d use if we kept the car heater on all night.

Let me be clear: I hate snow. Always have, always will. Luckily my wife does, too, having been cured of any romanticism about the substance by living two years in Minnesota. So why are we voluntarily spending a month in the middle of winter? No good answer, other than we thought it might be one of those old opinions that may changed over the years. Though I doubt it.

I grew up in California, which I believe is equally divided between skiers and surfers. There are a few who do both, but the majority of the people I know are one or the other. I’m a surfer. Most of my friends are skiers. They used to pummel me with invitations, saying how much skiing (this was before snowboarding, which I might have tried at a younger age) was like surfing. And they would point out hypocritical I was, saying that I hated being cold, when I regularly surfed in winter water that rarely reached 50 degrees.

I remember a crystalline moment of decision when I moved back to California after years of study on the East Coast (in snow, I’d like to point out). Unlike southern California, where I’d grown up, my new northern Californian friends started the recruiting process all over. I put on my analytical hat and did some math: with the price of equipment, travel, lodging and the actual passes, I figured that I could that money better getting a new wetsuit, with the leftover money able to get me addicted to cocaine. Guess which direction I took.

Back to the cabin in winter. Another reason for trying Colorado in January is that it gave me less chance of being injured. In addition to the fact that I don’t ski, I’ve found that snowshoeing is far less dangerous than hiking. How do I know? Because the last time I went hiking was seven months ago, here in the mountains around Durango. We were finishing our hike and headed for the lake when the dogs way ahead of me. I turned towards the lake and whistled them up. All three dogs came running at full speed. Our two chocolate labs, showing more intelligence than we normally give them, went around me. Our rescue dog decided that the shortest line is the most direct one. She hit me full speed behind the knee, severing my quad tendon and causing my kneecap to relocate to the outside of my leg. After one surgery and seven months of PT, I’m finally ambulatory and snowshoeing (dogless) may be part of my recovery. Except that it involves snow.

I’ll check in with you at the end of the month to let you know how it goes. I’m actually enjoying the snow, as long as I don’t have to go out in it.